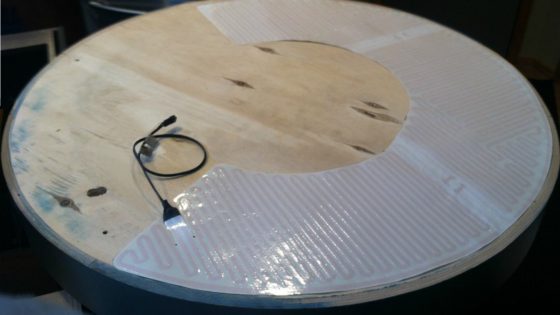 Heated Stone Products, creator of FeelsWarm® countertop heaters to warm stone countertops, announced today a new model for countertops without overhangs, such as kitchen islands or peninsulas. This new offering compliments the company’s core model, under-the-counter stick-on heaters. FeelsWarm heaters provide a solution for homeowners who are unhappy with the cold feel of their countertop and want to improve the luxury of their kitchen, bathroom, bar or basement counter.

The new FeelsWarm “NL” model is designed for customers installing a new countertop where the top of the cabinet has a solid support substrate. The customized, plug-and-play heating mat can handle hundreds of pounds of stone or weight when compressed. All models of FeelsWarm can be plugged into standard outlets without the need for special wiring.

“As the world’s leader in countertop heaters, we have been exposed to an enormous variety of countertop designs. This new model addresses the contractor’s need for extremely fast heater installations by permitting the heater to be installed in 60-120 seconds,” states Jahn Stopperan, President of Heated Stone Products. “The design simply rolls out onto the cabinet surface and the heavy stone can be placed directly onto the heater.”

FeelsWarm patented (pending) low-voltage heaters work with all types of stone countertops (granite, marble, quartz, and engineered stone) and are the only products on the market specifically for stone counters.

A one-minute video of how fast and easy the new FeelsWarm NL model is installed can be viewed on YouTube.